Shout out to Jessica Eckberg for exemplary work on the newsletter! 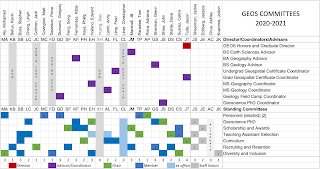 Staff Liaison: Staff liaison (or alternate)will attend all committee meetings, establish and maintain a online folder of committee documents, from each committee meeting make bullet list of discussion/decision items, archive online, and share link with department Chair and faculty (if appropriate).  The expectation is that each committee will meet at least twice per semester, if no action items are before the committee these meetings can be used for planning and discussion. Liaison can organize meeting calendar invitations and co-chairs if meetings are needed.
--- Director/Coordinators/Advisors ---

MS Geology Coordinator Reviews and ranks all MS Geology applicants and makes recommendation to Geosciences Chair to admit/decline. Assigns each admitted student to an initial faculty advisor that may, or may not, become the thesis advisor. Sits ex officio on Geology Teaching Assistant Selection Committee. [1]

Geology Field Camp Coordinator Oversee all aspects of preparation for GEOS 4686 Geology Field camp. This includes, but is not limited to, advertising, review and approve student applications, selection of teaching assistants for field camp, ensure field equipment (including vehicles) are maintained properly leading up to camp, field guide production, and safety plan. All of these activities are to be done cooperatively and by consensus with field camp faculty. Advise Department Chair on target enrollment and multi-year faculty coverage plan for field camp that ensures two-deep leadership at all times in the field. Coordinator may participate in field camp as swing faculty, but does not count toward requirement of two-deep leadership. [1]
Geoscience PhD Coordinator In coordination with individual advisors, monitors PhD Student progress.  Serves as Chair of GEOS PhD Committee.
Standing Committees ---

1.  The following get automatic scholarships

2.  Extra funds (if any) will be discussed by committee based on applications gathered via GoogleForm
3.  External scholarships

a.  Tulsa Geophysical Society scholarship must be for field camp so we put forward our best two GPA applicants from item 1.a and that money is given in addition to department scholarship as a reward for top academic performance
b. Other external scholarships based on application information, but not to any students in item 1

Curriculum Committee: Reviews curriculum and degree programs, and makes recommendation for modification/deletion/addition to Geosciences Chair and Faculty. Approves MS Geography quantitative and computational electives not in the approved elective list.
Geosciences PhD Committee: Reviews and ranks all PhD Geoscience applicants and makes recommendation to Geosciences Chair which ones should be admitted and declined. Each admitted student must have a faculty advisor and financial support.

Recruiting and Retention Committee: Propose, plan and coordinate new initiatives and engage faculty in creating and participating in recruitment and retention activities.

Diversity and Inclusion Committee: To be determined
Posted by Prof. Christopher L. Liner at 1:34 PM 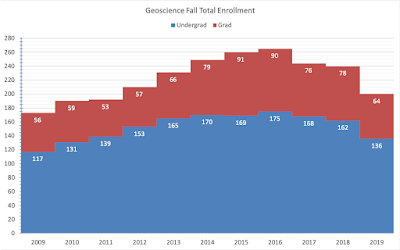 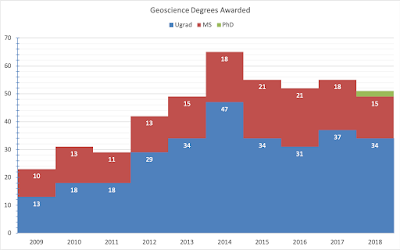 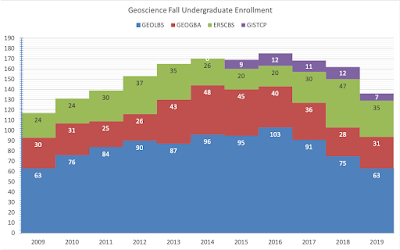 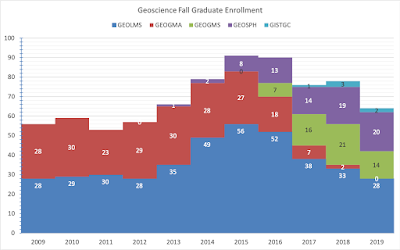 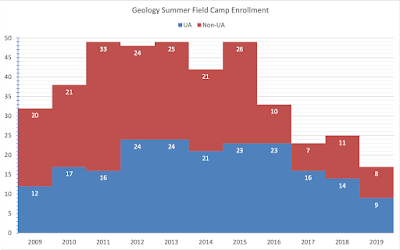 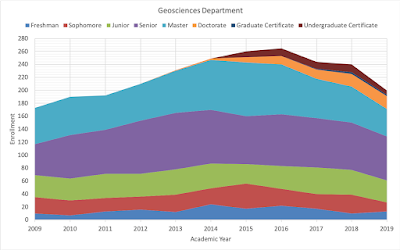 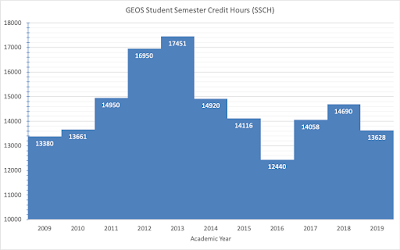 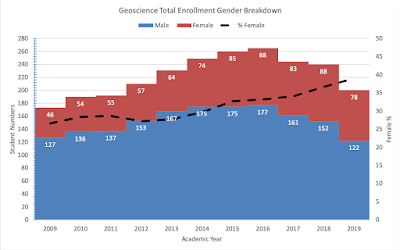 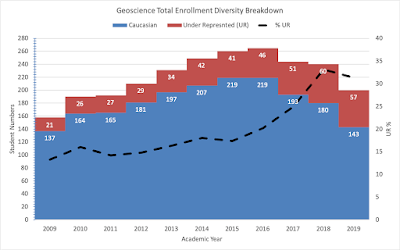 Posted by Prof. Christopher L. Liner at 8:37 AM

As of fall 2019 the following general rule is in place.

Each GEOS faculty member is expected to attend one of the three commencement opportunities  each year:

It has been in the news lately. The University of Tulsa is undergoing massive restructuring based projections that many private colleges will not survive the next decade due to declining college enrollments projected to hit in 2025. This topic is very active within leadership at the University of Arkansas with hints of a 30% or greater enrollment decline coming that could be a factor in the University going to responsibility centered management (RCM). If you do not know what this is, the University of Arizona is already there and has a good FAQ; for a glimpse at the dark side of RCM in higher ed read this.

I decided to have a look at the student forecast myself. The starting point for national numbers is the Elementary and Secondary Information System (ELSi) within the National Center for Education Statistics (NCES) within the Institute of Education Sciences (IES). Got that? 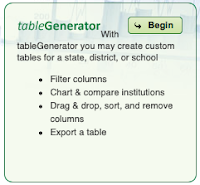 Well, back at ELSi there is something called the tableGenerator. The idea is to see if there is dip in elementary students moving through the system that will show up at my doorstep, so to speak, someday. I chose to look at first grade students (6-7 years of age). In the tableGenerator there are four tabs; in tab1 I chose 'State', tab2 'years 2009-2017' (the last year available), tab3 'Enrollments > Enrollment by Grade > Grade 1 Students (State)', tab4 'All 50 States + DC', then hit the Create Table button. The resulting table has each state on a row and each year in a column, with totals on right and bottom. A handy excel export button brings the data down to my local machine to make a graph.


The result is shown below. There is a definite peak in the data at year 2014. Kids in the first grade in 2014 were born in or after 2008 - the year of the great recession. If you have somehow forgotten about the Great Recession see this wikipedia article. Those same kids will start college (age 17-18) in 2025. The national first grade data shows a drop of 5% in total enrollment between 2014 and 2017, implying a college enrollment drop across the US between 2025-2028 with no bottom in sight (or at least in the data). Of course this is a questionable implication, it assumes US college enrollment is only driven by the number of college-age students in the US, that the drop will be felt equally across size and type of institutions, etc. But there it is. 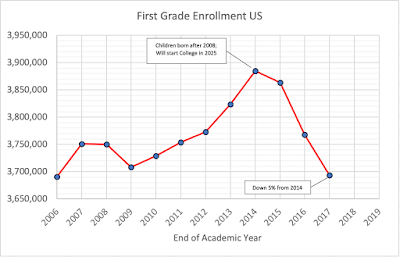 The ELSi table contained Arkansas (AR) data so it can be plotted on its own. A big shout out to my sister-in-law Gigi (a career teacher in AR) who put me on to the AR Department of Education who ran a report for me that brought the AR data up to 2019. Shout out to Connie C. for that! The result is shown below. First off, the data seems to have a glitch between 2013 and 2014, maybe a change in counting rules? Anyway, the same general features are present that are on the national numbers: a 2014 peak followed by a significant decline. With the AR data carried out to 2019 we see the decline flattening, but not bottomed out. The peak-to-trough decline over 2014-2019 is 7.7% -- significant but far from a 30% drop. 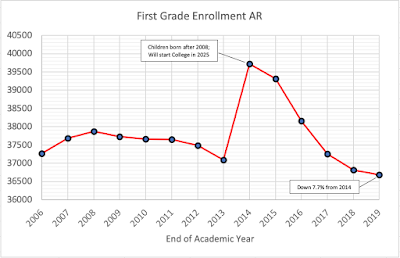 Just for the record, the U of A 2018 official enrollment was 27,778 and a 7.7% decline would be 25,639 students (a loss of 2139). To be fair, the argument is not just about raw input student numbers, but public institutions being disproportionately affected and well-heeled private institutions poaching the best available students nationwide.

But, to me, it looks more like a wave than a tsunami.